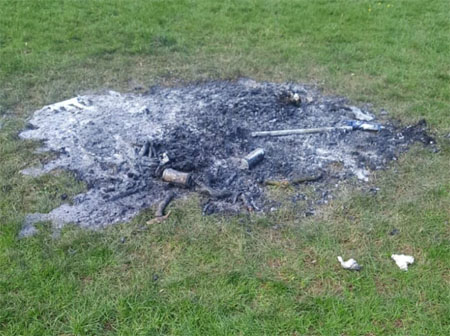 Scheduled football matches for Adderbury Park Football Club have been put in question after a significant area of the pitch at the Lucy Plackett Playing Field was damaged by fire. Overnight last Saturday (23 March 2019) a fire was started in the centre of the field which has resulted in the grass being destroyed and fire debris left around. This latest fire follows another having been started in a litter bin in the Lucy Plackett field in January, and increased reports of anti-social behaviour in the village.

This pitch damage was discovered by a family member of one of the players. Lee Young, the Assistant Manager for the 1st Team, went to the Lucy Plackett to investigate. Mr Young told Adderbury News, “The damage [was] in in the middle third of the pitch. The fire contained aerosol cans as well as a plastic chair”.

James Collier, Adderbury Park’s Chairman, said the damage would take some time to repair: “It has completely burnt the grass away. It will take levelling and reseeding of an area approximately 2m x 2m”. The effect on the Club’s scheduled games is uncertain. Mr Collier said, “With some clearance we believe it will just about pass to play for the Oxfordshire Senior League, [but we’re] not sure if it will the Hellenic League. That will all be down to the official if the game goes ahead”.

“It is Highly frustrating. The money we spend on field maintenance and to improve things down there, means it's very sad people feel the need to do this”.

Mr Young added, “It is upsetting when all we wish to do is offer sport and engage with the local community. My sole purpose to be part of the football club is to do the role that others did to allow me to play”.

The Lucy Plackett field is managed by Adderbury Parish Council who act as the trustees for the Lucy Jane Plackett Charity. The damage was reported to Councillors at their meeting on Tuesday evening. Councillor Ann Lyons told Adderbury News, “My husband, grandson and myself went to investigate and found that the blue wheely bin from the Activity Centre and several plastic chairs had been set fire to. The remains of deodorant cans were found in the ashes. My husband and James Herbert between them cleared the area, no easy task”. Councillor Lyons confirmed the matter had been referred to Thames Valley Police.

James Herbert and Pat Lyons clearing the remains of the fire from the field.

Mr Collier described this latest act of vandalism as “very saddening and disappointing”. He said, “It's not really about the football club but the field and community. It's a public field enjoyed by children and families. It's dangerous and unnecessary”.

Mr Collier is also concerned that the situation does not appear to be improving. He told us “[I’m] worried it will escalate and damage to buildings could be caused in the future. [It is] very worrying the increase in anti-social behaviour down the Lucy Plackett”.