Time to decide: voting in the Parish Poll gets underway on Monday afternoon 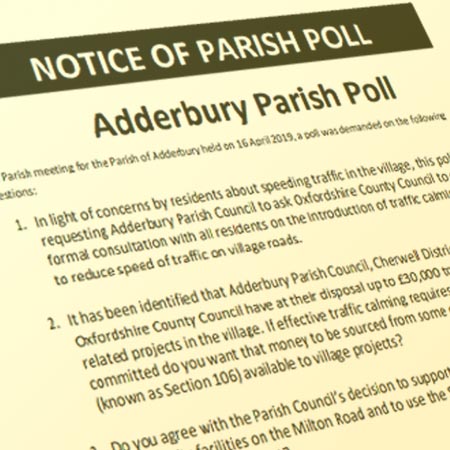 With just days to go until voting begins in the latest Parish Poll this weekend is likely to see a final push by those hoping to secure support from villagers.

Voting booths will open in the Methodist Hall on the High Street on Monday afternoon at 4pm. All villagers on the electoral role are entitled to vote, but on this occasion poll cards have not been issued and residents simply need to attend and identify themselves. The poll will close at 9pm.

The first two questions were set by Alan Ziff of Henge Close with question three set by Val Scarff of Chapel Lane. All three questions received sufficient support on the night to be included in a Parish Poll.

The West Adderbury Residents Association has distributed a flyer around the village which you can view here. They have apologised for the accidental omission of their logo to identify who sent the flyer.

The West Adderbury Residents Association Committee (James O'Neill, Steve Betts, David Taylor-Evans and Alan Ziff) have issued a statement to Adderbury News giving an overview of their position, which you can read here.

The Parish Council have issued a statement detailing their position with regards traffic calming and the Milton Road sports and community facilities development. You can read that statement here.

Working for Adderbury Community have organised an exhibition of their plans for the Milton Road sports and community facilities development which will also be attended by those from Adderbury Parish Council currently working on traffic calming plans. This is covered here.

All three questions will require a “yes” or “no” answer and the results are likely to be available late on Monday evening after the poll closes.

Adderbury News plans to publish an analysis of all the information we have received from different groups with regards traffic calming this weekend.