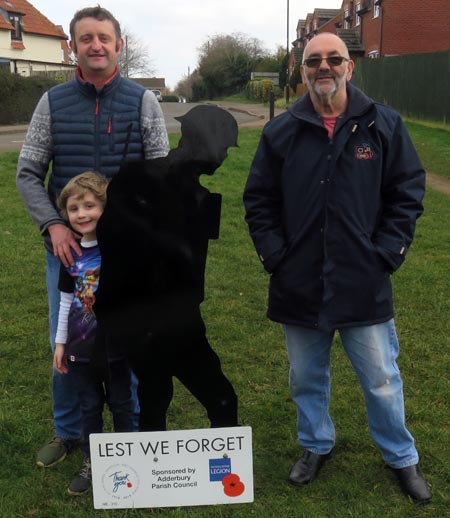 Three generations of the Jordon family have marked the moment Adderbury’s Silent Soldier was reinstated back in position at the entry to The Crescent.

Father and son Pete and Tom Jordon have spent the last couple of weeks repairing the silhouette figure after vandals damaged it. Initially the Parish Council had thought the figure was beyond repair, but the Jordon family were determined to see it fixed and back in position.

Pete Jordon told Adderbury news, “I was very disappointed that someone could do this. They had no respect. Tom and I had a look and we thought we could repair it”.

The damage to the figure was fairly extensive. Mr Jordon told us, “The gun had been snapped off at the top so I had to rivet that back together. The bolts had been pulled through the bodywork and the uprights had been bent and twisted”.

On Sunday morning Pete and Tom Jordon, together with Tom’s son Alfie, took the Silent Soldier back to its original position and ensured the figure was once again proudly on display as a reminder of the sacrifices of the First World War generation, one-hundred years after hostilities ceased.

Pete Jordon was delighted to see the silhouette back in position. He said, “It feels really good putting it back in place where it should be”.

Nigel Randall, Chairman of the Adderbury and Milton branch of the Royal British Legion was delighted to see the Silent Solider back in position. Mr Randall told Adderbury News, "I would like to thank Mr Jordon on behalf of the members of the local British Legion and, hopefully, many villagers for his selfless work in restoring the Silent Soldier to its former glory. It is humbling to find someone who is prepared to use their skills to the benefit of the community in such a way".