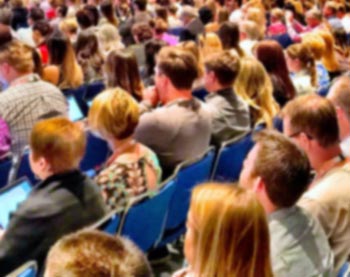 Adderbury’s Annual Parish Meeting ended in chaotic scenes last Wednesday (April 17, 2018) as villagers sought to take control of key decisions through the “Parish Poll” system. Residents on the electoral role will now be invited to vote on the three questions proposed at the meeting.

In fractious scenes inside a packed Methodist Church a number of exchanges took place between Councillor Colin Astley and Parish Council Chairman Diane Bratt who disagreed on the management of the meeting. During the public session concerns were raised by a number of people in relation to progress with traffic calming in the village.

As Mrs Bratt tried to close the meeting West Adderbury resident Alan Ziff proposed a parish poll to ask for Oxfordshire County Council to complete an official consultation on traffic calming in the village. Mr Ziff proposed a second question to ascertain the support for some of the funding currently allocated to the Milton Road sports and community facility project being used to address traffic problems. These are known as Section 106 (S106) funds. Mr Ziff’s proposal received support from a number of West Adderbury residents.

However, comments from others indicated they felt Mr Ziff’s proposal was simply a ploy to take funding away from the Milton Road project. Val Scarff from Chapel Lane proposed a Parish Poll question to ascertain support for ensuring funding for the Milton Road sports project remained as currently allocated to the project.

Cherwell District Council has told Adderbury News that it has received all three questions and confirmed they were correctly proposed, having received the required support of 10 individuals. Cherwell will now organise a Parish Poll, the cost of which will be paid by the Parish Council. Cherwell’s spokesman was unable to confirm the cost, but stated all three questions would be posed during a single Parish Poll. A previous Parish Poll in Adderbury cost around £980.

Concerns were expressed during the meeting as to the merits of holding a Parish Poll. Parish Council Chairman Diane Bratt told the meeting that the results of a Parish Poll were not legally binding. Andy Green* of Walton Avenue urged caution at spending money on a Parish Poll when the ultimate decision maker in terms of the allocation of Section 106 funds would probably be Cherwell District Council, not Adderbury Parish Council.

Earlier during the meeting villagers had seen an overview of the Milton Road project by Jackie Head and a presentation on addressing traffic problems by Jonathan White. Mr White’s presentation detailed the evidence that had been gathered across a number of traffic surveys and the potential solutions the Council’s Environment Group were proposing. Mr White believes that whilst the intentions of those requesting a Parish Poll may have been to speed up progress on dealing with traffic problems, their actions may actually have had the opposite effect.

Mr White told Adderbury News, “Much as I feel strongly that more money should be allocated to road safety in Adderbury, for the reasons Andy Green outlined last night, it seems to be extremely unlikely that it will come from the s106 funds allocated to the Milton Road project – not that it needs to be or should be an either/or choice. Therefore, despite the importance that many attendees appeared to place on improving road safety, it seems that the output from last night will primarily add delays, volunteer time and costs to an already overdue, under-resourced and under-funded piece of work. That is more than a shame – not least because the outcome sought from the proposers of the poll(s) seemed to be completely the opposite”.

A spokesman for Cherwell District Council told Adderbury News that plans were now being put in place to organise the Parish Poll. They told us “Potential dates are being discussed with the Returning Officer . The poll must be held between 14 and 25 days after the poll was demanded (days are calculated excluding Saturdays, Sundays and Bank Holidays)”.

These are the confirmed questions that will be asked: