Plans for Three 5-Bedroom Houses in The Leys Attacked 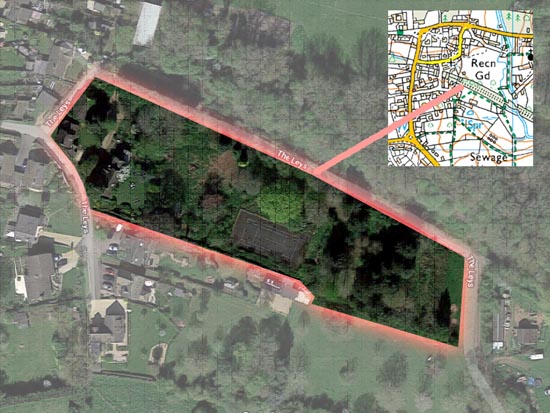 Plans to build three 5-bedroom houses in the back garden of a house in The Leys have been attacked by those concerned that the area is not suitable for such a development.

The owners of Biggam House have applied for planning permission to create three new dwellings behind their existing property. Each house would include a double garage and a separate drive accessed from the adjacent concrete road, which is the main access to the sewage works.

The plans claim that “The dwellings have been carefully located within their plots to ensure that the significant trees within the site can be retained”. However some objectors do not agree. Julie Bateman lives in The Leys and contacted Adderbury News. Mrs Bateman told us, “I am very unhappy and concerned. The removal of so many trees and the health of the remaining trees, one of which is a very old oak which undoubtedly has roots across the proposed plot 1”.

The planning application also details the redirection of an existing public footpath which it cites as being “disused and overgrown”. The footpath currently runs diagonally across the garden. Beth Rutterford, the Countryside Access Officer for Oxfordshire County Council is not happy with the suggested new route. Writing to Cherwell District Council Ms Rutterford said, “this proposed route is unacceptable as the route is longer than the original and contains two 90 degrees turns which are often considered to be less convenient to users … The plans also indicate that the path will be fenced out from the garden from of Plot 1. Presumably this will be done using the high close board fencing indicated elsewhere on the site. This sort of fencing is unsuitable as it can create a narrow passage way which can become dark and unpleasant to use”.

Adderbury Parish Council has objected to the planning application. In it’s response to Cherwell District Council the Council highlighted their concern as to the suitability of the local roads infrastructure to deal with the traffic generated by these additional properties. It said, “Access to the proposed development is not compliant with Highways standards. Tanners Lane and The Leys are narrow village roads unsuited to increased traffic. Also the immediate access for these three proposed dwellings is from a ‘concrete service road’ which is narrow and partially used as a public footpath with no clear division for walkers. This is unsuitable for general vehicle traffic and there is no right of access for vehicles along this track which, despite the redline boundary on the applicant’s plans, is not in the applicant’s ownership”.

Those wishing to comment on the planning application have until this Tuesday (7th May) to make their views known to Cherwell District Council. The full application and site plans can be viewed on the Council’s website using the reference 19/00619/F.