Traffic calming confusion? The deciding factors in the Parish Poll 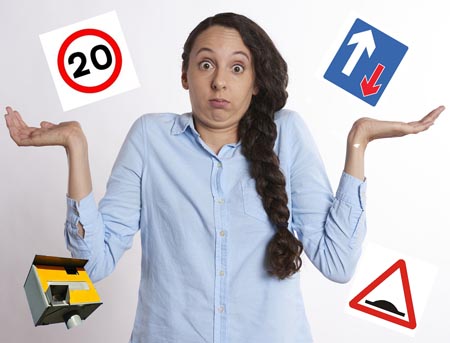 On Monday villagers are invited to vote in the latest Parish Poll, with traffic calming the core issue this time. In amongst the various messages from rival campaigns some people remain confused as to what they are voting for.

In essence you are being asked to vote on whether you are happy with the Parish Council’s current plans to deal with traffic calming. If you are not happy the second question then asks whether you are happy for funds to be diverted from other projects (primarily the Milton Road Sports and Community Facility scheme) to pay for additional traffic calming measures, if needed. The third question seeks support for protecting all the funds currently to the Milton Road Sports and Community Facility scheme so they aren’t used for anything else.

It is likely many villagers will be unaware of the work that has been undertaken on addressing traffic calming since 2016. This is Adderbury News’ overview of the issues that have led to Monday’s Parish Poll. It covers:

- The involvement of Oxfordshire County Council.

- What the Parish Council has done about traffic calming since 2016.

- The differences between the current “within budget” £30,000 plan which will continue with a “no” vote and a shelved larger £170,000 project some hope could be re-instigated with a “yes” vote.

- The desire by some to use some of the money currently allocated to other village projects to pay for a larger traffic calming scheme.

On Monday villagers are invited to vote in a Parish Poll with support for two of the three questions seen as sending a clear message to the Parish Council that traffic calming is a priority and must be dealt with now. The latter of these two questions aims to identify support for redirecting some of the funds currently allocated to other projects (primarily the Milton Road Sports and Community Facility) to traffic calming. The third question, set by a different villager, seeks support for the opposite approach by ensuring the funds allocated to the Milton Road project remain untouched.

Concern over traffic speeds and the volume of vehicles on village roads has been gathering momentum over recent years. It is a subject raised by villagers with increasing frequency at Parish Council meetings.

Ultimately the responsibility for traffic calming falls to Oxfordshire County Council (OCC). Anthony Kirkwood from the Traffic and Road Safety Team told Adderbury News, “As the highway authority, the County Council is aware of national legislation and guidance on traffic calming measures and offers general advice on the suitability, effectiveness and cost of different options based on our own experience and that of other authorities. All calming schemes have to be approved by OCC, and we would of course require that the proposals comply with the relevant regulations and where appropriate a road safety audit has been satisfactorily completed (such audits are not typically required for very minor schemes / speed limit changes)”.

It would, however, be for Adderbury to design the basic model for any traffic calming scheme. Mr Kirkwood explained, “it’s correct that parish councils – Adderbury in this case - would have this responsibility, with the expectation being that they would employ suitably qualified traffic engineering consultants to prepare the detailed plans …. where the proposed scheme only comprises a speed limit change, the design work is minimal and this would be incorporated in the approved fee we make for the formal consultation”.

Mr Kirkwood confirmed that OCC staff could be commissioned to complete the design plans for Adderbury for an extra fee in addition to their legal and administration charges. All the costs for building and implementing a traffic calming scheme would be down to Adderbury as no central funds are available for this.

Councillor Astley told Adderbury News, “A final report by the Traffic Calming Group in October 2018 concluded, with the help of Oxford County Council, that traffic calming measures should be implemented across the village at an approximate cost of £170,000. The recommendation was that informal consultation should be carried out by [Adderbury Parish Council] across the village to both support the concept of traffic calming and the commissioning of [Oxfordshire County Council] to undertake the design, a safety audit, costing and formal consultation at a cost of £12,500”.

When the report was presented it was attacked by Councillor Keith Mitchell for being unrealistic in terms of obtaining the necessary funding and because he believed it was not a report representing the views and input of all members of the working group. Councillors rejected the report’s recommendations by six votes to four.

Councillor Mitchell proposed the work of the Traffic Working Group be absorbed into Environment Committee and this was agreed by seven votes to four.

The committee first met in November 2018 with Jonathan White from the Oxford Road being co-opted as a non-voting member. At the first meeting it was identified that there was approximately £25,000 of Section 106 funds which could be available for traffic calming in the village, together with a smaller amount from within the Parish Council budget.

A number of potential traffic calming measures were explored and graded by expense. Many of those in the lower cost bracket were deemed as achievable within the available budget of around £30,000.

The Parish Council is currently progressing the elements of its Environment Committee’s traffic calming proposals which can be achieved within the existing budget. However this plan is likely to omit many of the recommendations of the original Working Group. Some of those arguing for traffic calming feel something like the original plan is the only one which will be effective. They hope a “yes” vote to the first question in the Parish Poll will achieve this by showing the Parish Council the strength of feeling that they must commission Oxfordshire County Council to complete the design, a safety audit, costing and formal consultation.

Councillor Astley told us, “The differences [between the two schemes] are simply down to one trying to squeeze measures out of a small budget and the other starting with what is a meaningful solution and the ways that more significant requirement can be funded. That is a decision for all residents because it is their money and if they support the measures then one way or another they will pick up the tab”.

So what are the differences between the old and new schemes?

The original scheme broke the village into three areas with different measures recommended for each. The total cost was estimated to be around £170,000 to create (including around £7,000 for Twyford, £2,000 for East Adderbury and £151,000 for West Adderbury). This is an Adderbury News illustration to demonstrate the original scheme detail.

The current scheme takes the village as a whole and differentiates items by cost band. The proposed items to include within the initial £30,000 budget as shown on the second page. This is the current scheme detail and you can also see the presentation made at the Annual Parish meeting.

If the first question in the Parish Poll receives enough support, and if it persuades the Parish Council to commission Oxfordshire County Council, the costs of £12,500 can probably be covered by the existing budget of £30,000. This would only leave £17,500 towards the estimated costs of £170,000 for a larger project. It is assumed work currently underway on traffic calming would probably be paused, or cancelled.

The second Parish Poll question seeks to gain support for using some of the money currently allocated to other projects (primarily the Milton Road sports and community centre facilities).

It is questionable as to whether this is possible, as previously analysed by Adderbury News. However the West Adderbury Residents Association committee don’t agree and told us, “Variations to how Section 106 funds are spent can be made if all parties agree. The developer has confirmed to WARA that they have no objection to funds being used for village traffic calming. The other party that would need to agree is Cherwell District Council (CDC). This Poll should be a loud voice to make it clear to CDC that the village would like some funds spent on traffic calming. The Parish Council is simply a statutory consultee and has no vote on the outcome”.

Meanwhile, for the current Parish Council traffic calming plans it is understood the County Council’s costs would be less than the £12,500 quoted for a larger project. The current scheme does not require design work. Should the scheme implement items requiring a Traffic Regulation Order as, for example, in the case of a speed limit change, this would incur a charge of £3,120. An additional charge of £1,800 is made for the legal and administrative work involved in a traffic calming scheme which includes road humps or speed cushions, or £1,600 for other types of traffic calming measure.

This is a complicated subject and each individual must make their own mind up.

The second question tests the strength of opinion as to whether the funds that are mainly allocated to the Milton Road project should be dipped into to pay for traffic calming.

The third question tests the strength of opinion as to whether the funds that are mainly allocated to the Milton Road project should not be touched. This is effectively the opposite position to question 2.

Whatever the results on Monday night, the Parish Poll is not legally binding and Adderbury Parish Council does not have to implement anything as a result.

Adderbury News has published a number of campaign statements for the Parish Poll in another article.

Adderbury News is happy to receive and publish comments on the above article from people providing a full name and address. We reserve the right to edit submissions due to space constraints.