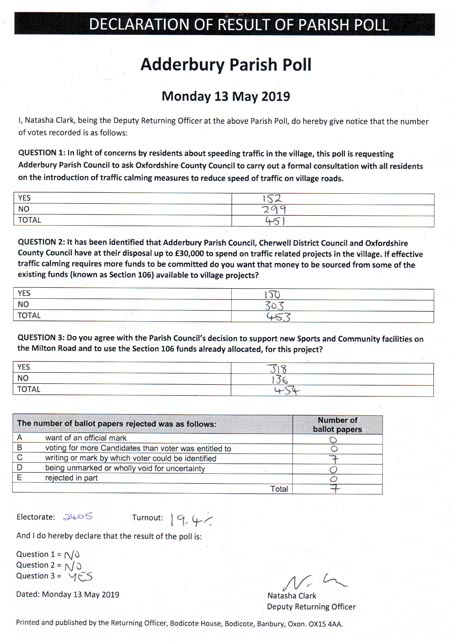 The results of today's Parish Poll have been announced:

Val Scarff set question 3 in the poll.   Mrs Scarff told Adderbury News, "It was a most positive and resounding result yesterday and I am delighted that the people of Adderbury again made their feelings very clear and supported the No No Yes campaign.   So thank you to all who voted and I sincerely hope that everyone now can work together for this wonderful village of Adderbury - not East or West, there is no such thing - BUT for the whole parish of Adderbury/Twyford".

"WARA raised 2 out of the 3 Parish Poll questions as a direct request from our members when we asked them what the action should be after conducting a traffic consultation with West Adderbury residents in January - those results are attached and make clear the issues residents in West Adderbury are concerned with:

• 403 households were contacted during December /January
• We had 169 responses: 42% of all households in West Adderbury
• 93% of residents wanted active measures taken to combat traffic speed
• 87% wanted Section 106 funds used to pay for traffic calming

"West Adderbury only makes up 23% of the parish electorate but 33% of the vote was in favour of more action on traffic control than the parish council is willing to undertake.

"The 3rd poll question was raised by a proxy of WFAC/APC as a diversion to a very important issue. WARA has NOT opposed the Milton Rd project, it was set-up after the 2017 Poll and accepts that result. Any accusation contrary to that fact is false and used as a divisive tool by the usual suspects to split opinion in the village.

"Residents in Twyford and West Adderbury have some real concerns about traffic safety and our poll questions reflected that, let's all hope no-one gets hurt on our village roads".